FIFA🌐 Will 'Stand Firm' on Women's Access to Iran🇮🇷 Matches 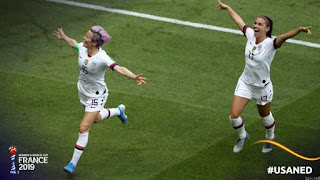 Fifa will "stand firm" in ensuring women have access to all football matches in Iran despite claims the world governing body could have prevented the death of an activist. Fifa's head of education and social responsibility Joyce Cook, "We're totally focused on making sure women can attend this match on 10 October and working just as pragmatically to ensure women also can attend local matches in league football - but it's about what follows as well. Fifa has a very firm stand - fans are equally entitled to attend matches." Women have effectively been banned from stadiums when men are playing since just after the 1979 Islamic revolution. But Fifa said it has been "assured" by Iranian authorities that women will be able to attend matches. More than 3,500 tickets have been sold to female fans for Iran's World Cup qualifier against Cambodia in Tehran on Thursday. The issue came to global prominence after Sahar Khodayari, known as 'blue girl' because of the team she supported, set fire to herself outside court last month as she awaited trial for trying to attend a match disguised as a man. The 29-year-old died a week
<