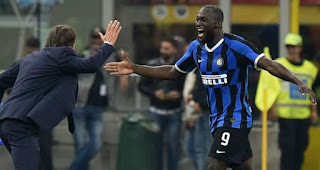 Marcelo Brozovic and Romelu Lukaku struck as Inter continued their 100 per cent start to the Serie A season and extended a strong recent record in derbies against city rivals AC Milan with a 2-0 victory.

A deflected strike from Brozovic four minutes into the second half and a late clincher from Lukaku settled a contest that Antonio Conte's men always looked likely to win.

Milan, the designated home team at the shared San Siro, only produced one shot on target and were comfortably kept at arm's length by Inter after the opening goal.

The Rossoneri have now lost two of their first four games under coach Marco Giampaolo and failed to beat Inter in seven consecutive league derbies.