Conference Ahead of Chelsea MatcH 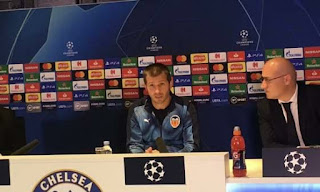 Conference Ahead of Chelsea  MatcH
- they chose to boycott the media event because of the sacking of their previous coach - Marcelino.

Douglas Costa⚡ Ruled Ouit😟 of Champions League Clash at Atletico
- The Brazilian winger will sit out the Atletico clash and potentially Juve's second Group D match at home to Bayer Leverkusen on October 1.

Rooney: 🔈 "American🇺🇸 Players8 in MLS are Underpaid"
- The league's existing collective bargaining agreement is due to expire on Jan. 31, 2020, with players having previously threatened to strike before a final-hour deal during the last negotiations in 2015.


Andy Robertson⭐ Might Miss Napoli Clash in Champions League Due to Injury😟--Robertson featured and went 90 minutes for Liverpool in their 3-1 victory over Newcastle this past weekend.