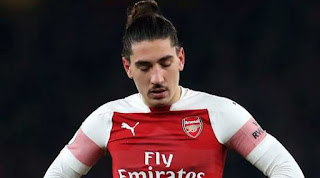 Hector Bellerin has made his return from injury, playing for Arsenal’s Under-23s against Wolves on Friday night.

The Spanish right-back, 24, suffered a serious knee injury when playing against Chelsea in January, missing the rest of the 2018-19 season as well as the beginning of this campaign.

However, he has taken in his first competitive appearance since being sidelined, playing 62 minutes for the Gunners development side in the Premier League 2.

“After eight long months, I’m finally in the red and white, finally on the pitch,” Bellerin said in a video he posted to social media.

“It’s been a tough period, but I’ll be back better than ever, and I can’t wait to be at the Emirates.”

In Bellerin’s absence, Ainsley Maitland-Niles has made the right-back position his own, beating out competition from Stephan Lichtsteiner and Carl Jenkinson last term.