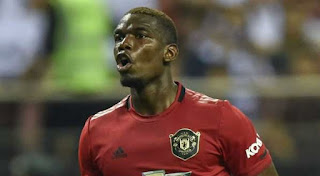 Pogba said a 'question mark remains' over his future following United's 4-0 rout of Chelsea in their Premier League opener on August 11.

While the Premier League's transfer window has already closed, the La Liga and Serie A markets remain open until September 2 – prompting ongoing speculation about a possible move to Madrid or a sensational return to Juventus.

Solskjaer, however, has no concerns over star midfielder Pogba ahead of United's trip to Wolves on Monday.

"I don't think it's odd saying enjoy playing, I have fun with my team-mates, I enjoy what I'm doing, I love my job and enjoy the game.

"There's not one press conference that I've not answered a question about Paul Pogba – 80 per cent of what he said was that he enjoyed that game and his time here.

"I've got absolutely no concerns on Paul. For me, yeah, he's going to stay."