Philippe Coutinho's season-long loan move from Barcelona to Bayern Munich has been confirmed by the La Liga champions.

The Bavarians will pay an €8.5m fee for Coutinho, as well as the player’s wages.

And the deal also gives Bayern the option to buy the Brazil playmaker at the end of the campaign for €120m.
3
The Brazilian came to Barça in the January transfer window in the 2017/18 season from Liverpool. Since then he has played a total of 75 games as a blaugrana in which he has scored 21 goals and provided 11 assists. 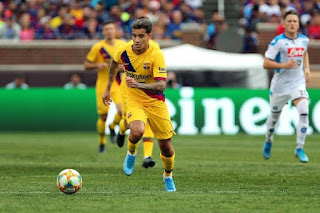